It is accepted knowledge that the process of winemaking came to the Americas through the Spanish.  The traditional story has been that Spanish priests brought Mission grapes (also known as Criolla and Pais) from Europe to plant vineyards.  These vineyards succeeded in Texas, California, & New Mexico & throughout Latin America.  While there were plenty of wild grapes in America, they weren’t traditionally used for wine & the indigenous people didn’t make wine.

Now that story may have to be revised.  A new study by Dr. Crystal Dozier, an anthropological archaeologist and assistant professor at Wichita State University suggests that the indigenous people of what is now Central Texas may have been drinking wine made from native grapes over 500 years ago.  They found residue of  tartaric and succinic acids on pottery.  While these chemicals are commonly found together in grapes, they aren’t generally found together in any other fruits in the Americas. They also found grape seeds. Here’s an article with more information. https://www.winespectator.com/articles/was-there-wine-in-america-before-europeans-toyah-central-texas-unfiltered. 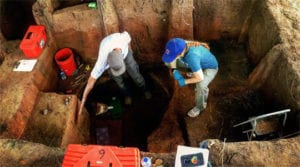 It makes sense that wine would have been made with native grapes (Vitis Labrusca Vitis Aestivalis and Vitis Rotundifolia).  The biggest issues with native grapes from an oenophile (wine geek) standpoint are that they lack sugar & that they can have an unpleasant earthy or animal smell due to the presence of methyl anthranilate that for some reason is called “foxy”.  The lack of sugar compared to European grapes (Vitis Vinifera) means that you must add sugar during fermentation, or you get a low alcohol wine.  The earthy nose mixed with the grapey flavor can be off putting.  The level of smell varies with the vintage.  It is more prominent in riper warmer vintages.  The residue found in these digs however would be from the time of the little ice age.  So those grapes probably didn’t have a problem with the smell but would have had difficulty ripening.  My guess is that this would have been a wine with an alcohol level closer to beer than to the wine we are used to.  That being said, plenty of people can attest to the intoxicating power of drinking large amounts of beer. 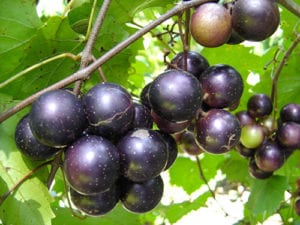 Mustang grapes on the vine

When I lived in Fredericksburg Texas, we had a huge old Mustang grape (Vitis Mustangensis) vine in our back yard that was as tall as a tree.  Those grapes were insanely acidic & not good to eat by themselves.  However, with copious amounts of sugar they made great jam.  Some examples of Mustang wine where the wine has been

allowed to age for several years were very tasty.

At Twisted Cedar we make sustainable wine with classic European grapes.  No sugar is added to the wines & of course they smell wonderful.  Thanks to this discovery though I feel like we are carrying on a more than 500-year-old tradition of tribal wine production.